Jeff and Christina first found Santa Maria through our Promoting our Preschoolers (POP) program because their daughter needed a tutor. They were experiencing financial difficulties and were referred, by the POP home visitor, to Santa Maria’s Stable Families Program. In 2014, they were referred to our Workforce program, for Financial Coaching, as they were not able to pay their bills on time. During their participation in our services, Jeff got laid off from his job and was referred to our Employment Workshops. Shortly after completing our workshops, Jeff re-entered the Workforce, where he obtained full time employment in the supply chain industry. He and his wife continued with financial coaching as they maintained their employment.

They since have been able to move their household of five from an apartment to a house. Both Jeff and Christina have continued to work on their finances as they took advantage of two of our financial tools: our matched savings account and credit builder loan. Jeff did not have a credit score when he started the credit builder loan but has since improved his credit score to over 600. He has been able to qualify for a secured credit card, which he will use to continue his credit building. Christina’s score improved by 85 points and is now also scoring above 600. She used her matched funds to pay off collection debt. They plan to continue working on their financial goals. Jeff recently passed his one-year anniversary on the job and has received a promotion and raise. They have increased their net worth, continue to increase their financial education and work towards self sufficiency. Jeff contributed by saying, “The folks at Santa Maria have been and are a godsend. I don’t know if we’ll ever be masters at budgeting and saving enough for life’s unpleasant surprises such as a broken down vehicle or losing a job, but I do know that we are much better equipped and more faithful in ourselves to get through those times than we ever were before our time with Santa Maria.”

Santa Maria is proud of the work our Financial Opportunity Center staff does to help our clients succeed and keep moving forward in life. 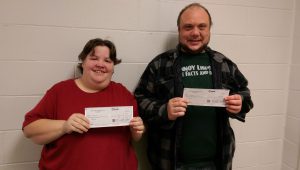