At the young age of three, Erika Hernandez immigrated to the United States from Mexico with her single mother and two sisters. Though Erika was young at the time and does not remember too much of the move, she recently told us that this was a difficult time for her family. Erika’s mother, single and with three small children, had just made the leap to bring her family to an unfamiliar country with an unfamiliar language — however, she was determined to give her three girls an opportunity for a better life. Throughout the years, Erika has pushed herself hard to live up to that goal.

Erika was a junior at DePaul Cristo Rey High School in Cincinnati when it was time for her to find an organization for their work-study program, which would allow Erika and her family to afford the school’s tuition. She did her research and found Santa Maria Community Services, the agency where she wanted to work.  She says that she was impressed with the breadth of services Santa Maria provides, and she sensed that the agency does “lots of good” for people.

At the time Erika started working for Santa Maria, she was a student and was pregnant.  She was terrified at the prospect of telling people about her pregnancy.  This made caring for herself and the baby even more difficult.  She asked indirect questions about her “friend’s” needs so as to camouflage her own needs, struggles and questions.

The future journey was not very easy for Erika. She had to finish the school year, work at Santa Maria on Fridays, and care for herself all while having to prepare to have a baby. The School Counselor at DePaul Cristo Rey High School advised her to seek support from Every Child Succeeds, which she also found at Santa Maria.  Erika soon began working with Santa Maria’s Every Child Succeeds Home Visitor, Rita Killinger.

After a few visits, Rita was able to supply Erika with Baby Bucks, which are vouchers that gave Erika access to a wide array of baby supplies and donations at Pregnancy Center West. Before the baby was born, Rita took Erika to Pregnancy Center West to help her select and take home the baby items that she would need.  These included clothing, diaper wipes, diapers, blankets, bottles, toys and pacifiers.

Rita also nominated Erika for the Procter and Gamble Miracle Mission Baby Shower. Erika won the nomination, yet Rita kept it a surprise and told Erika that she won a trip to the zoo with her friends and family.  When Erika arrived at the zoo and saw that she was actually being thrown a baby shower, she was astounded and ecstatic. At the Procter and Gamble baby shower, Erika was given a year’s worth of free diapers among a plethora of toys, baby items and even a family membership to the Cincinnati Zoo. In addition, for Christmas, Erika was selected to be the recipient of a local donation which included toys, clothing and food for her and her family.

On April 30, 2014, little Jayden was born, and it changed Erika’s life forever. She now wanted to do everything she could to give him the best life.  She wanted to work, and Rita taught her how to look for a job.  She also mentioned her dream of wanting to be the first in her family to go to college, something that Rita encouraged her to do as well.  Alongside the school counselor at DePaul Cristo Rey High School, Rita helped Erika get together a list of colleges and universities and start the application process.

Rita was visiting Erika and Jayden every week after the birth, but when it came time for Rita to visit every two weeks, Erika requested that Rita continue to come weekly, stating that she and Jayden would miss Rita too much.  After Jayden was nine months old, Rita began visiting biweekly.

“I don’t know what I would do without Ms. Rita. I would have dropped the school and got stuck. I can trust her. She brought so much kindness and understanding into my life. Her laugh is funny and wonderful. She is wonderful. I am so glad I have two more years to work with her,” – Erika says.

When asked to name five values she wants to instill in Jayden, she names the following: self-respect; honesty; kindness; forgiveness; and Responsibility

Self-respect is the most important to her, since this allows her to set personal boundaries which are not to be crossed by herself or others and will not allow for wrong-doings.

As Erika went through Santa Maria’s Every Child Succeeds program, she was able to build that self-respect and to look into the future.  She is graduating from DePaul Cristo Rey High School this Spring and has been accepted to the University of Cincinnati. She is planning to start her studies in forensic science this Fall.  When asked where she sees herself in five years, Erika mentions that she plans to graduate from University of Cincinnati and have Jayden in kindergarten. She wants to help her sister with raising her nephew and is definitely planning on influencing her little sister to pursue college in the next couple of years. She wants to have a job and a car; all things that some of us take for granted. She is determined to live her dream. 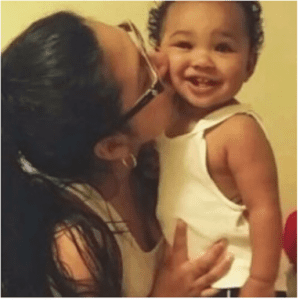