Amy is a mother of five and active in Santa Maria’s POP (Promoting Our Preschoolers) Program. Amy’s oldest daughter, Elizabeth, began the program about 10 years ago when they were approached in the neighborhood by Santa Maria POP staff member, Regine. Regine gave Amy a brochure explaining the program and asked if she’d be interested in taking part in it. Amy decided to enroll and from then on, each of her children have been through or are currently going through the program.

The POP program is a twice-a-month home visitation program that emphasizes giving parents and caregivers materials and information for students to be successful in kindergarten. The ultimate goal of the programs is to lift up the whole family in their aspirations of success both educationally and in life circumstances while preparing children for kindergarten and continued success in school.

Something that Amy and her kids have really appreciated is the guidance they were given by not only the agency, but more specifically, by Santa Maria POP staff member, Jamie Mutter, who was in charge of the family’s home visits. Jaime has worked with all of Amy’s children and has been a huge part in their lives. “Amy was one of my first clients when I started at Santa Maria 9 years ago,” states Jaime. “I worked with her daughter Elizabeth. It has been a joy to work with this family over the years. Amy really takes what she has learned and uses it with her children. She will send me pictures and videos of activities that she is doing with her children. She is a great mom and she works hard to make sure her children get the best education possible.”

During home visits, Jamie would teach, draw, and journal with them. The home visits for Amy and her family have always been something they look forward to because it takes their minds off of other things and brings them to a place of joy. Because of Jaime’s guidance and role, Elizabeth feels like she has an advantage educationally and because of that, she is on the A and B honor role for her school. “If I have kids in the future I would love for them to be a part of POP and I would maybe even want to work for the program,” stated Elizabeth.

Amy mentions that she is lucky to be a part of the POP program because of the advancement her children get in school and how smart they are for their ages; she sees the growth in her kids by what they learn/learned. Amy’s children have received a push which helps them now and in the future, in discipline in school and in life. 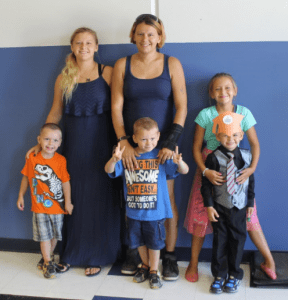